Kashmir: A Tragedy of Errors 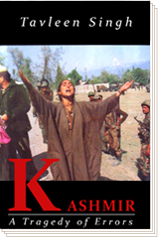 Talveen Singh is a noted political columnist and television personality. As a correspondent she has covered political events in the subcontinent and troubled states like Punjab and Jammu and Kashmir for various newspapers and magazines including the Telegraph, Sunday, India Today and the Sunday Times, London. She is a recipient of the Sanskriti award for journalism in 1985 and the Chameli Devi award for best journalist in 1987.

Tavleen Singh is the author of Kashmir; A Tragedy of Errors. also published by Penguin Books. She lives in Delhi with her son.

‘In the many years I have spent as a political journalist I have travelled often from one end of the country to another, from Kashmir to Kanyakumari, as the phrase goes, and everywhere I have gone I have seen some version of Lollipop Street. Speed breakers where no roads exist. Hording urging people to have only one child in villages where most of the inhabitants are illiterate. Signposts stuck in wastelands declaring them children’s parks. Boards sticking out of lake announcing that the fencing around them has been built by the Forest Department. Who cares who builds the fences if the lakes remain polluted? But these are the sort of questions nobody asks.’