Political and Incorrect: The Real India Warts and All 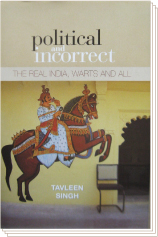 The Real India, Warts and All is history as first draft, written not in hindsight but as events unfolded against the backdrop of a nation’s transformation. It captures the country’s mood and its politics over these two decades, and highlights the things that don’t change. Such as politicians and bureaucrats, and their self-serving ways. There is, besides, her take on subjects as different as freedom runs by Gucci Gandhians, Durbar intrigues at the centre of power and the religious divide in Gujarat. It is a record too of missed opportunities and misplaced priorities, so that some of the old eternals-healthcare, education, poverty-remain pretty much as they were, or are in worse shape.

The one thing that leaders cannot afford to do is whine. It demoralizes the people they claim to lead and makes the leaders themselves look less like leaders and more like a pathetic bunch of snivelling schoolboys. Yet ours get away with whining constantly, even in our moments of gravest crisis. Much as they were or are in worse shape.

Political columns used to be a matter of pompous comment. Tavleen Singh made her column a direct dialogue with the reader, one that could make the politician seem as familiar as the man next door and the issues at stake accessible and clear. In doing so she makes these two decades and the people who feature come alive even to one who is not familiar with either. And reminds us that, the real battle remains ahead. Making Political and Incorrect both riveting history and a primer on the future.

Tavleen Singh has written two oter books, Kashmir: A Tragedy of Erros and Lollipop Street: Why India will Suvive Her Politicians. She has worked as a journalist for more than thirty years covering political events on the subcontatinent for publications including India Today, The Indian Express and the Sunday Times, London. She has also worked in television doing several current affairs programmes in Hindi and English. She has been a columnist for the Indian Express and two weekly syndicated columns in English and Hindi that appear across india. She anchors her own TV show for NDTV Profit and divides her time between Delhi and Mumbai.