Lollipop Street: Why India Will Survive Its Politicians 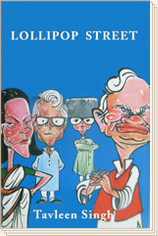 The intriguing title of the book derives from a crowded stretch of the highway from Mumbai’s airport into the city where a series of serve as advertising billboards; a wasted aesthetic gesture-and an expensive one-to make in an expanse of slum. Our politicians have a gift for the unless gesture. And these lollipops serve as a metaphor for many others that have been offered to gullible voters since independence. Thus politicians have come and gone offering promises of drinking water, school, health facilities, jobs and numerous other things to justify their election to power. But all they have left behind are collapsing foundation stones as makers to their intentions.

In Lollipop Street, a series of hard-hitting and sometimes hilarious profiles of the leaders of contemporary India. Tavleen Singh explodes the myths that surround many of them of them and highlights the achievements of a few who may actually make a difference. There are profiles here of prime ministers, chief ministers and others who have have been or are in power as also of icons from areas outside politics. Among those profiled are Inder Kumar Gujral, George Fernandes and Rabri Devi. There are also Amitabh Bachchan, Shah Rukh Khan, M.F. Hussain, Amjad Ali Khan, Adi Godrej and a host of other achievers in the arts, entertainment and the business world-people. The author avers who are truly in touch with the spirit of the nations. It is they who have shown that India will survive despite the bumbling efforts of its leaders.